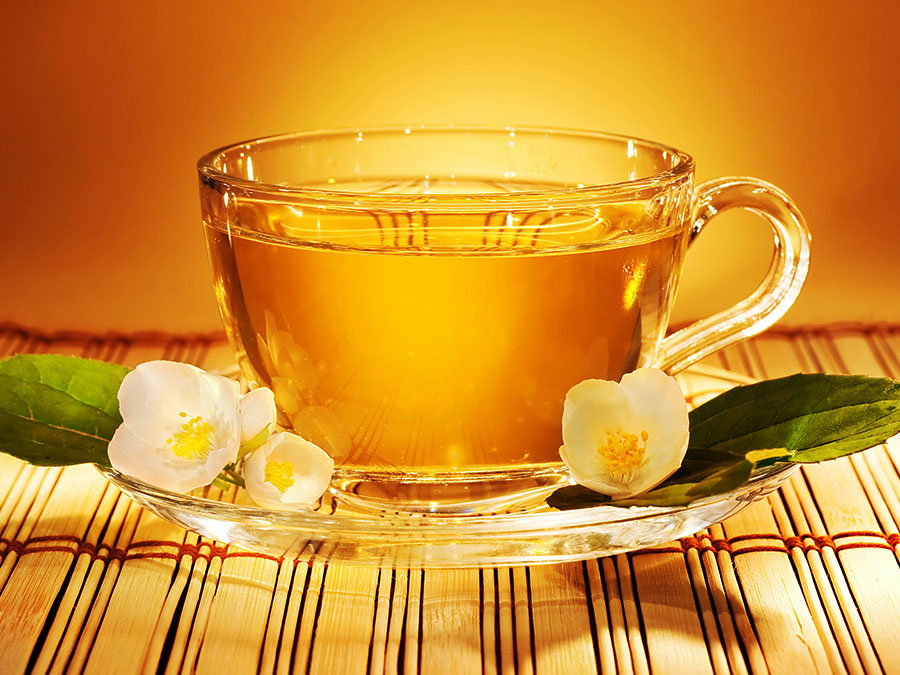 Green tea is named after the vibrant green color it takes on after pouring. Yet its leaves are harvested from the same tea plant (Camellia sinensis) as the leaves for black tea.

Whether black or green tea is produced from these leaves is controlled by further processing after harvest.

For black tea, the leaves go through a so-called fermentation which oxidizes the tannin. For green tea however, the oxidation of the tannin is prevented by roasting or steaming the leaves so that both the green color as well as the healthy phytochemicals are retained.

In addition, green tea is rich in caffeine, which is however, only released gradually. This is why the stimulating effect is milder than that of coffee.
Over 2,000 studies attribute the positive health effects of green tea to mainly the catechins.

In particular, the antioxidant activity of catechins which is 20 times higher than that of vitamin C. This can effectively render harmless free radicals as well as prevent many diseases.

Green tea has also been proven to :

In addition, the consumption of green tea has another positive effect of improving fat burning by stimulating the metabolism; the reason why green tea has become a staple in the weight loss industry.

Green Tea Lowers Blood Pressure and Inhibits Tumor Growth
The fact that green tea is also a good blood pressure was proven by a study at the University of Poznan/Poland in 2012. For 3 months, a group of 56 overweight patients with hypertension received a capsule containing 390 grams of green tea extract daily. This dosage corresponds to about three cups of tea. An equally-sized group received a placebo preparation. At the end of the study, the group receiving the extract had their upper and lower blood pressure levels drop by as much as 5 mmHg. In the group receiving the placebo, however, no changes in blood pressure values were observed.

If you suffer from high blood pressure, consider replacing your cup of coffee with a cup of green tea more often.

Some studies suggest that green tea can reduce the risk of certain cancers such as colon cancer. A study at the University of Glasgow/United Kingdom showed that catechins from green tea leafs could present a new opportunity for cancer treatment. Scientists have been able to bind the catechins to a biological transport medium so that it can reach tumor cells directly. So far it has been successful only in animal studies in reducing malignant skin tumors. This advancement, however, gives genuine hope for the future development of new therapies against malignant diseases.

Until then, you can reduce your personal risk of cancer by drinking a cup of green tea daily.

Articles on this website are based upon the opinions of their respective author(s). None of the information on this website is intended as medical advice nor replaces the advice of a qualified health care professional.